During last Thursday it was possible to send your entry to the Mozilla GameOn 2010 Competition. There were more than 160 games submitted, but some of them was disqualified because of 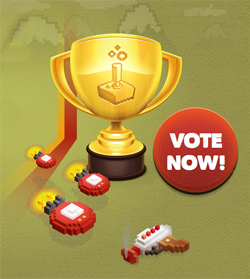 using 'non open' technologies like flash or Unity. Finally, there are 124 chosen titles in the gallery. Checking almost every game I found couple of technologies, libraries, plugins, frameworks or engines I've never heard of before, or just forgot about. Some of them are worth describing in here. First of all I totally forgot about HTML5 Boilerplate, an "HTML/CSS/JS template for a fast, robust and future-proof site", used in Snake game [MGO2010]. Another technically interesting entry was Black Obelisk [MGO2010], written completely in haXe, opensource programming language with ability to compile to Javascript, Flash, NekoVM bytecode, PHP, C++ and C# or Java in the near future. 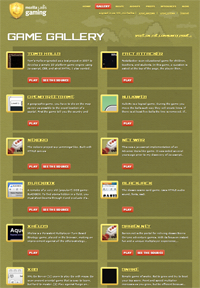 Couple of games was written in Java with cross-compiled JavaScript presentation layer using GWT, eg SVG-EDU [MGO2010] or Zulu [MGO2010]. Main reason people used Flash in their games was enabling sound effects (like Sinuous [MGO2010], the winner of 10kApart). But Wizard Wars [MGO2010] used SoundManager2 to achieve same effect. Mad Tanks TD [MGO2010], one of my personal favorites in the competition, uses LESS, which "extends CSS with variables, mixins, operations and nested rules". Looks cool! (both, the game and the compiler:) ). I was impressed with amount of WebGL based games. In Red shooting Hood [MGO2010], made by Tymon Zgaiński from Poland, member of polish gameDev community Warsztat, I found Sylvester, "Vector and Matrix math for JavaScript". Open web implementation of simple and well known Frogger [MGO2010] was compiled to Javascript & canvas using Ristretto Mobile, "a Web-based Compiler for Running Interactive Games and Simulations". My own entry, OpenOdyssey [MGO2010]was made simultaneous with Mibbu framework and is based on it. I'm not satisfied with the final result, but I will develop both after the competition. If I will find some free time during the weekend I will write few words about OO & Mibbu.